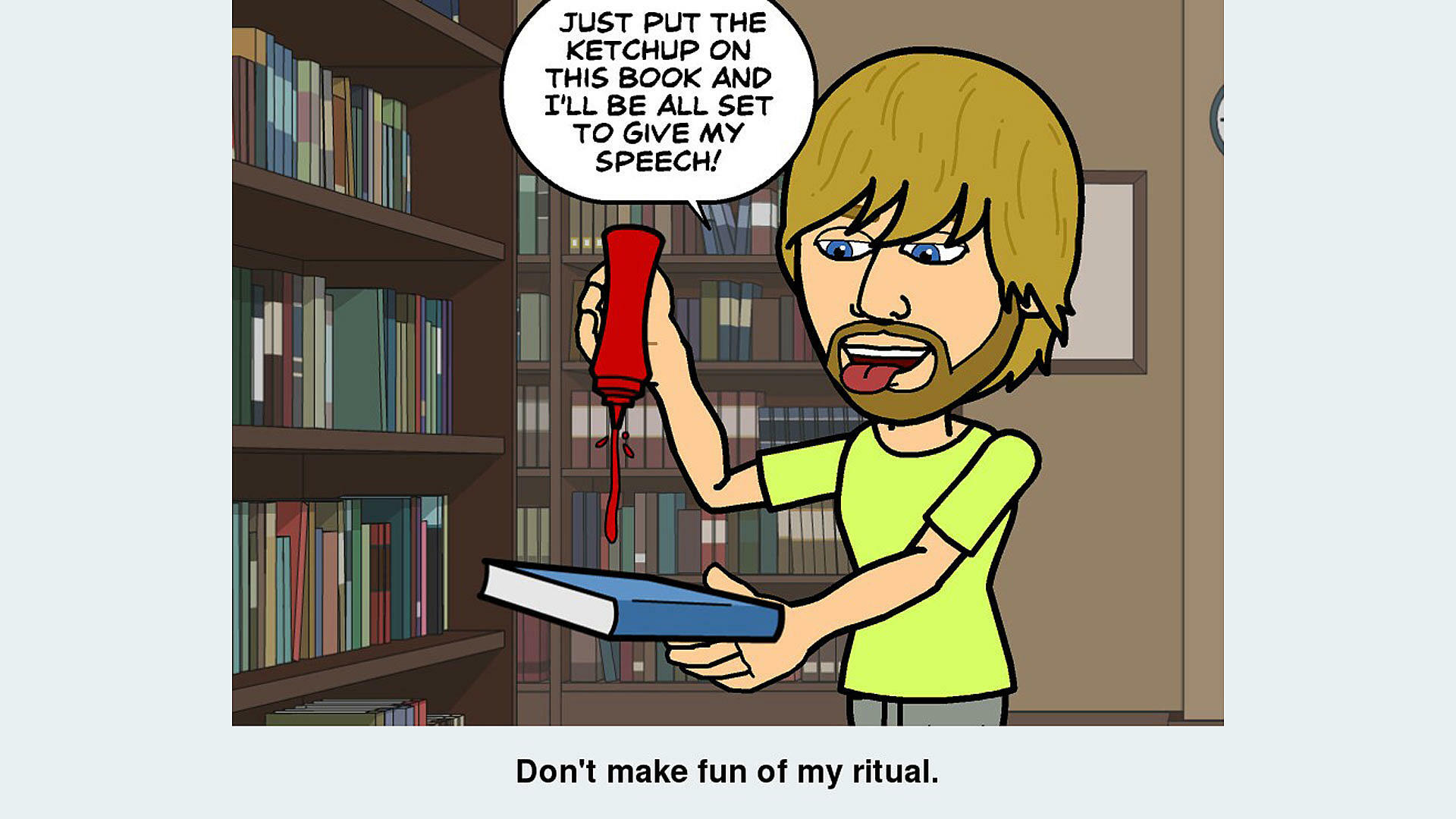 More specifically, I was watching the Packers beat up on the Vikings (sorry dad).

Anyway, a commercial came on in which people were doing several rituals in hopes that it would help their team win the game.

While I know for a fact that twiddling your thumbs or facing your beer bottle outwards does not affect the outcome of another person’s field goal, I got an idea.

So, I got to researching.

Here’s what I found:

Why in the world do we do rituals?

We’re trying to prevent something bad from happening.

That’s exactly what was happening in the commercial. There was a study by Jane Risen in which people were told to say something like “there’s no way I or anyone I know will get into a car accident this winter in Chicago” and then either knock down on the top of the table or knock up on the bottom of the table. Those who knocked up on the bottom felt the probability of getting in a car accident was higher than those who knocked down on the top. Risen was led to believe that we literally want to push away the potentially negative outcome.

Something bad just happened to us.

Think about the loss of a loved one. We hold a funeral. According to a study by Mike Norton and Francesca Gino, people who perform rituals after something bad has happened will experience less grief and a higher feeling of control.

To make an experience better.

During holidays, before we eat our meals, we sometimes make a toast or say grace. Does this actually make the experience better? According to a study by Kathleen Vohs, the answer is yes. In her study she had people do a ritual with a chocolate bar and another group of people do nothing. The ritual involved participants breaking the chocolate bar in half, unwrapping one part, eating it, then unwrapping the second part, and eating it. Afterward the participants were asked how much they would pay for the chocolate bar. Those who had done the ritual were willing to pay more than those who did not.

Why do rituals work?

Rituals work because of the placebo effect.

The placebo effect is when there is a positive effect that can attributed to something we believe.

For example, if you wear a charm to a football game and you catch the game winning touchdown you’ll likely connect the great catch to the good luck charm.

Your brain will then associate the charm with good luck and help the outcome of whatever you’re doing be more positive while wearing it.

This charm will give you a confidence boost.

Though you’ll need to keep these rituals to a minimum.

Some rituals are out to get you. It’s time to fight back

It’s possible to overdo your rituals and make yourself too confident.

This is seen in stock traders that become so confident that they make poor trades and lose crazy amounts of money.

Same with people who play the lottery and think that their rituals will affect the outcome of the lottery.

This is completely out of reality.

If you believe in superstitions such as bad luck for walking under a ladder or seeing a black cat, the placebo effect will actually give you anxiety even if there is nothing to worry about.

Things like stock trading, travel, and movie releases decrease on Friday the 13th because of negative associations, when in reality there is no difference between Friday the 13th and any other day.

Michael Jordan, basketball superstar – underneath his Chicago Bulls shorts he wore his North Carolina college shorts during every game.

Kenneth Chenault, CEO of American Express – before he leaves his office at night he writes down three things he wants to accomplish tomorrow. That means he is all set to start working in the morning.

Margaret Thatcher, former U.K. prime minister – every morning she would wake up at 5:00 am to listen to “Farming Today” even if she had late night political meetings the night before.

Benjamin Franklin, a founding father of the United States – each morning he would ask himself, “What good shall I do today?” Then he would use a few hours block between 5:00am and 7:00am to address “Powerful Goodness”, plan for the rest of the day, and have breakfast.

Is there anyone in your life that uses rituals or doesn’t believe rituals work?

Share this with them to let them know that rituals work!

And be sure to comment below to let us know how you feel about rituals.

Do you do any "weird" rituals that make you more productive?