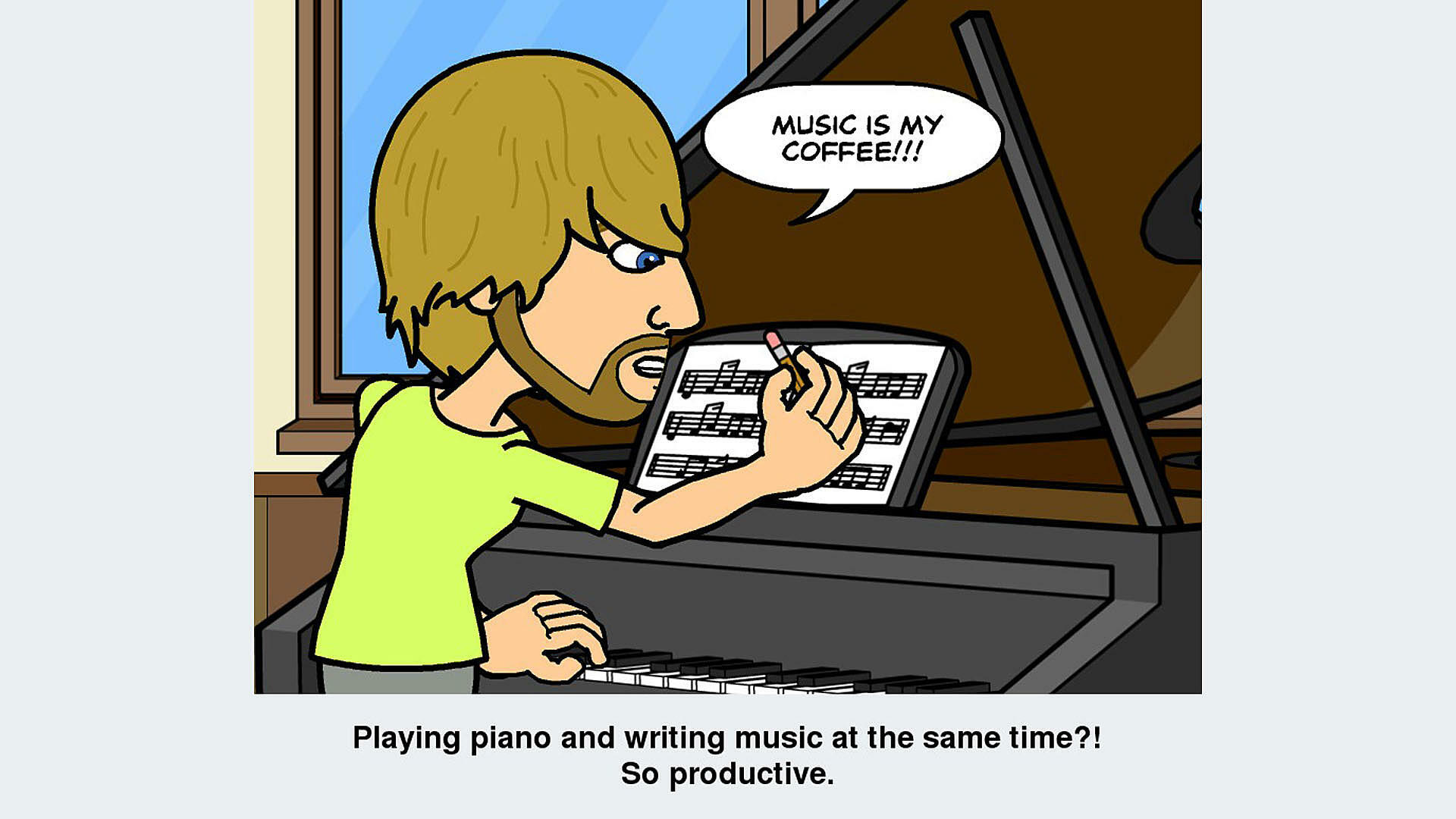 At my desk job we are allowed to listen to music.

And it’s great for not having to listen to your coworkers blab about American Idol all day.

But when clients visit our site we can no longer use them.

I have to stuff my headphones in my drawer to be forgotten about.

On those days, it seems I’m more likely to get distracted, lose focus, and I feel less productive.

But am I actually getting more work done while listening to music?

Or is it just in my head?

Music may be your friend in this situation.

When doing repetitive tasks it has been proven that music can increase performance.

Because our favorite music brings us a sense of happiness.

And it was proven in a study that showed assembly line workers were happier and more productive while listening to music than when they weren’t.

To make the repetitive task seem less boring try listening to music that you haven’t heard before.

New music is surprising; you don’t know what’s next, so you’re listening more closely, and that takes away from mindless tasks.

Trying to do rocket science (aka study or learn something new)?

Here’s where music may not be your friend.

At the University of Wales Institute, Cardiff, they showed that students had a harder time remembering information than when they did the same experiment while in complete silence.

Researchers believe this is because music demands too much of your attention.

On top of that, music with lyrics have shown to further decrease the ability to learn new information.

If you do need to listen to music while trying to learn something make sure it’s something you’re familiar with.

Unlike music you don’t know, with music you’re familiar with, there isn’t surprise, making you less likely to focus on the music.

Trying to paint a psychedelic mural on your bedroom wall (aka being creative)?

Marcus E. Raichle, a professor at Washington University in St. Louis, discovered the “Mind wandering mode” of the brain.

This is the default state of the brain and is most responsible for inspiring creativity.

Even though it’s the default state, music is a great way to enter mind wandering mode.

It relaxes you, helps you forget about problems, and prevents you from thinking too analytically.

Listening to music that compliments your current mood can break down any barriers to your imagination.

And the creative juices start flowing.

So what’s the best type of music to listen to while being productive?

That really depends on who you are.

Some people can blast through tasks while listening to instrumental death metal and others need Taylor Swift’s beautiful voice to guide them to victory.

However, there are studies on what type of music may be best for performance.

Try them out and see which is best for you.

Self-experimentation at its finest.

Music is your best friend when being creative or when doing repetitive tasks, but not when learning something new.

I had a friend in college who listened to nothing but classical music.

And he was one of the most productive people I knew.

He said the reason it helps him so much is because it takes him away from the distractions of everything going on around him, yet isn’t so in-his-face when studying or being creative.

In a real study, eight radiologists were asked to listen to Baroque-style classical music during their work. Seven of them reported not only an increase in productivity, but an increase in mood as well.

David Allen, a productivity writer, says you should be looking for tunes with around 60 beats per minute.

He believes that 60 bpm is where our brain is most optimal and causes a “bright and breezy” state in which creativity and thinking flourish.

Where do I get it?

Wikipedia has a pretty nifty collection of freely licensed files.

And you can always check out the Baroque Pandora station.

Although not like traditional classical music, the Vitamin String Quartet is pretty awesome. They cover pop/rock artists in string quartet music style. They even have Tool covers!

Ambient music works just as my friend in college put classical music – it isn’t in your face, but keeps you to yourself.

The genre was designed to help us relax, but also stimulate the brain just enough for inspiration.

Ambient melodies repeat and build on each other, but remembering from above familiarity helps productivity.

Studies show that while listening at a moderate noise (~70dB) level ambient music can make you more creative.

However, too much noise will render the opposite effect.

Thus, you want to avoid extremely high and extremely low levels of noise.

Where can I get it?

Chill out on Spotify is nice, but only if you don’t mind lyrics.

If you’re feeling adventurous, you can check out Sunn O))). They are more dark ambient/doom metal and might not be your style, but I listen to them from time to time and find it pretty nice.

I never really appreciated video game music as much as I do after doing some research on it.

The designers/composers know they need to create music to play in the background, yet not distract the player.

Some sucks and is distracting, like the Runescape soundtrack (sorry Runescape, you’re fun, but your music is bad), and some, like the SimCity or Minecraft soundtrack, are the most popular suggestions on Reddit for “music that helps with concentration”.

The designers, Maxis, mastered the ability to create enjoyable music that blended into the background, but didn’t distract you from building a metropolis and then tearing it apart with a tornado.

That’s how you play SimCity, right?

Where can I get it?

You can download all of the SimCity songs for free.

Another one I like is the World of Warcraft soundtrack, although some of the songs can be a bit distracting.

The Elder Scrolls' Oblivion or Skyrim soundtracks are also super awesome. I listened to those while writing this article.

You can find video game music on Spotify as well. My personal favorite – The Legend of Zelda.

What’s on my playlist?

When I’m trying concentrate on something I almost always need music playing to drown out outside noises. It also keeps me happy and not-so-bored. You might not care, but here are a few of what I listen to when I want to be productive.

Most of my productivity playlists are made up of metal or lo-fi.

I have a 3000+ song lo-fi playlist called Tenochtitlan on Spotify that you are welcome to follow.

Very few songs in my playlist have vocals because I find them distracting.

If I feel I need vocals – 10 Years, Chevelle, Circa Survive, Filter, Nivana, A Perfect Circle, Queens of the Stone Age, Tool, The xx.

What’s on your playlist?

I love to find new music to listen to, whether it helps me be productive or not.

Comment some of your favorite music playlists for productivity!

As always, if you know someone who might be able to benefit from this article don’t be afraid to send it to them.